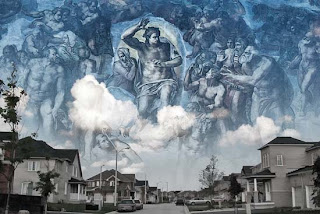 Lots of talk about endings recently. I talked about the end of The Sopranos and the end of Charlemagne. Euromad used the end of his time in Rome to riff on the end of both The Sopranos and Veronica Mars (a show, I'll admit, I never watched). And now comes new revelations (pun intended) that Sir Isaac Newton, that "discoverer" of gravity, examined the biblical Book of Daniel to figure out that the world would end no earlier than 2060 CE.

The article's absolutely fascinating. Not so much for the fact that Newton cared about the Book of Revelations or the coming Apocalypse or anything like that, but rather because he took such a common, ancient/medieval line in trying to do so.

In one manuscript from the early 1700s, Newton used the cryptic Book of Daniel to calculate the date for the apocalypse, reaching the conclusion that the world would end no earlier than 2060.

"It may end later, but I see no reason for its ending sooner," Newton wrote. However, he added, "This I mention not to assert when the time of the end shall be, but to put a stop to the rash conjectures of fanciful men who are frequently predicting the time of the end, and by doing so bring the sacred prophesies into discredit as often as their predictions fail." [my emphasis]

Postponing the end. Not saying that the end won't come (because you really can't do that in a Christian cosmography) but saying that it's a ways off -- not too far, but far enough that you don't really have to worry about it. Richard Landes has a fascinating article on this pattern of postponement in the early Middle Ages, as biblical exegetes would periodically reinterpret the age of the world so that the year 6000 AM (annus mundi) wouldn't be too close (Richard Landes, “Lest the Millennium Be Fulfilled: Apocalyptic Expectations and the Pattern of Western Chronography, 100–800 C.E.,” in Werner Verbeke, Daniel Verhelst, and Andries Welkenhuysen (eds.), The Use and Abuse of Eschatology in the Middle Ages (Leuven, 1988), pp. 137–211). One was never able to categorically reject the nearness of the Apocalypse, but these medieval scholars would postpone it just enough so that popular concern might be abated, at least for a while. And here Newton is, doing the same thing 1000 years later.

And here we are, doing similar things 300+ years after Newton. Remember Y2K? Remember 9/11? Why the modern Christian evangelical interest in supporting the state of Israel? That's right, the end is coming soon. Not right now but sometime soon. Fasten your seatbelts.

Posted by Matthew Gabriele at 8:35 PM