I Don't Hate You, Really 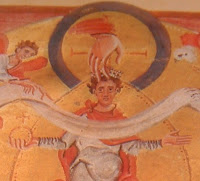 I feel like I should clarify something because, in this post and this one, I'm pretty sure that I'm sounding like I hate the Middle Ages or (perhaps better) that I hate the people who lived in the Middle Ages. That's not true at all.

Granted, I don't particularly like most of the people I've "met" in my studies -- it would be particularly unpleasant, I think, to have a beer with Fulk Nerra, for example -- but I'm still absolutely fascinated by them. What they did, how they did it, and why they did it. Sometimes, just sometimes, like the mournful closing to Book IV of Nithard's Histories or the image of Otto III in the Gospel Book created for his coronation as emperor in 996 (shown here), it hits you that these are real people who lived real lives. In the latter, an orphaned boy of 16 had just become emperor, son of a German emperor and a Byzantine princess. Look at Otto's eyes. Every time I look at this image, I can't help but feel that that crown, placed upon his head by the hand of God Himself, weighs heavily upon him.
Posted by Matthew Gabriele at 1:10 PM