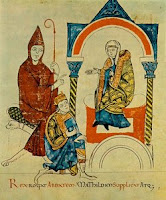 Over at Unlocked Wordhoard, on how to read allegory. Although Dr. Nokes limits his discussion to allegorical literature (literature explicitly intended to be read as allegory), I think his notes are much more broadly applicable to anything written in the Middle Ages (and much written before and after). Take my favorite teaching example from the late 11th century:

Emperor Henry IV tried to present himself as another Charlemagne but instead turned into another Roboam.

Now, what does that mean? Lambert doesn't say but he knows that you (the reader) will get it. You'll hear "Charlemagne" and think "pious," "conqueror," "emperor," "Aachen," and remember the grandeur of his empire. But Lambert also knows that you'll hear "Roboam" and think "Israel," "dissension," "struggle," and "collapse." Roboam was the succesor of Solomon and the king who allowed a united Israel to splinter and ultimately collapse. Lambert's on the side of the papal reformers and he's making quite a statement about the emperor here -- masked, perhaps to us, but not to his contemporaries.

As Dr. Nokes says, read carefully. Lots of neat stuff there.
Posted by Matthew Gabriele at 11:45 AM

Very nice! I think I'll start using this example from now on with my students! But yes, I agree, I think that most students are completely unprepared to read medieval literature (and most early modern too, just taught Milton and most students weren't even aware of the Fall of the Angels!) because they don't get the references and allusions.