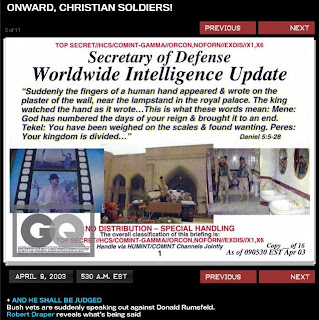 Image: Screenshot from GQ.com, slideshow of covers to Rumsfeld's memos.

--> The whole piece reads like an apologia for a certain segment of the Bush II administration -- Rice, Card, etc. Everything -- even the response to Katrina! -- was Rummy's fault. That stuff's interesting but needn't detain us here.

--> Not at all the main point of the article but contained within it, are the covers to classified intelligence memos that Rumsfeld himself (as Sec. of Def.) would deliver to the President. One of those is captured at right (again, for the full slideshow, go here). They all have images from previous day's events (mostly in Iraq) and they all have "appropriate" biblical quotations. The one in the image here, as it says, comes from Daniel 5. The whole chapter tells of the prophetic vision of King Belshazzar, the son of Nebuchadnezzar, and the false scholars who can't understand God's plan. Daniel, however, can understand the divine writing and foretells Belshazzar's doom, how God will cast down his kindom. The rest of the quotations on the memo covers are similar but this one in particular reminded me of this:

He changes times and seasons, deposes kings and sets up kings (Daniel 2:21)

Why did I think of this last quotation? It was a favorite quotation of Pope Urban II (1088-99), the man who in 1095 stood in a cold field at Clermont, in what's now southern France, and asked his listeners to engage in a holy war. Urban believed that God would cast down the proud Muslims who then held the Christian East, including Jerusalem, and those who truly believed would find His favor as instruments of His will. There's a reason one of the chronicles of the First Crusade is called Gesta Dei per Francos ("The Deeds of God through the Franks").

I'm not arguing for any sort of 1-1 comparison. Context matters. You can't simply put events, even very similar events, up next to each other and just look for similarities if those phenomena are separated by more than 900 years. Moreover, going by what Draper has to say in that GQ article, Rumsfeld used these quotations utterly cynically. He didn't care much for religion but he knew that his boss (Pres. Bush II) did. Rumsfeld thus knew that using these quotations would allow him to push Pres. Bush II in directions Rumsfeld wanted, by using language familiar to Pres. Bush II.

But then, this does suggest some similarities. Pres. Bush II perhaps would think this way and be receptive to this type of framing -- the events in Iraq as a holy war. Not Christians vs. Muslims, but the chosen people (for example, see also the image in the slideshow before the one above that has a quotation from Isaiah 26) against God's enemies. If you look at the language of the sources of the First Crusade, they too don't care so much about their enemies. I mean, they have only a very tenuous grasp of the religious difference between their enemies and themselves. The only thing that matters is that they -- the Muslims in this case -- held Jerusalem, that they stood in the crusaders' way, that they weren't Christian. This meant that they were enemies of God, that the crusaders were participants in a cosmic struggle between good and evil for the very fate of the world. You've heard this before, and you'll likely hear it again. Perhaps, I ask again, the best thing to do is to realize that it's time we stop being surprised when it happens.

Sometimes, people ask me how the Middle Ages matter. Sometimes, I want to ask them how they could possibly not.
Posted by Matthew Gabriele at 11:48 AM

Firstly, this is very true, and secondly, that Spectator article's great.

That slideshow is just damned scary. It’s that sort of fundamentalist/ essentialist religious discourse that makes those of us in secular western countries outside the US so twitchy about the war in Iraq and the ‘war on terror’.
And thanks for the link to the Spectator article – I’ll forward it to all those people who look at me in bemusement when I tell them I’m studying medieval history.

I wrote a book recently (http://www.saintmarksbody.com) that included some scenes in Baghdad around 827 AD. I was struck by the similarities between Al-Ma'mun's conquest of Iraq in the "War of the Brothers" and the more recent one:

* Al-Ma'mun had a great general who was a master of mobile warfare. His smaller, nimbler forces defeated Al-Amin's army in the desert very quickly, then the victorious forces entered Baghdad where,

* they found and executed the enemy leader Al-Amin quickly, but...

* an insurgency sprang up and kept Al-Ma'mun's forces tied down for over ten years. There are contemporary accounts of near-naked, barely armed fighters ambushing Al-Ma'mun's heavily armed and armored soldiers in the streets.

Turns out that Baghdad has always been easily conquered, but quite difficult to subdue!

Thanks for visiting, Richard. Indeed, the lessons of history are there, I just caution about 1-1 comparisons (not that you're making one...).