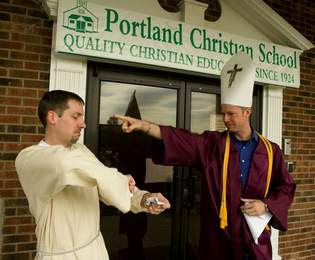 "Re-enacting" the Lutheran revolution in Portland (near Louisville), KY, USA.

Article today in the Louisville Courier-Journal about a (n apparently) non-denominational Christian elementary school in Portland, KY that had a "hands-on" history day, transforming their school into Wittenburg, ca. 1517.

The kids came in "medieval" costume and apparently learned all about themes "key to Protestant faith," such as the 95 Theses, John Calvin's qualifications for a good wife ("'They seem like good qualities to me,' said Daija Anderson, 11, a sixth-grader. 'It's good to be chaste, economical, interested in other people's health and not to be fussy.'"), and wrote a code of civility for their classes. All in all, "'It really is an opportunity for the community to come together on the day it really happened and celebrate our religion,' Seay [a teacher] said. 'You can preach it in history class or social studies but until you put your hands on it, it's not really that real.'" [my emphasis] See also a gallery of photos here (all cute kids in cute costumes, although I do like the Christian pirate costume and the tin-foil hats).

When I first scanned this article, I was all prepared to launch into a glorified snark-fest about all this. But now I'm not so sure. I like the hands-on history stuff, especially for kids. At their age, of course, you're not looking for them to grasp the intricacies of politics, culture, society, and theology that underpinned the Reformation. And if you can get just 5-10% of them interested in the past -- and its importance -- then you're doing something good. It's really up to their secondary and post-secondary teachers to fill them in on the rest.

The thing that I still find problematic though is how such events are deployed to inform identity construction. Note how Ms. Seay talks about preaching (her word) the Reformation in her History/ Social Studies classes. It suggests that this is all being presented rather uncritically. The Reformation -- or better, THEIR MYTH of the Reformation, complete with direct confrontation between Luther and Pope Leo X -- becomes so foundational to their understanding of themselves that they can't escape it. Read the Portland Christian School's "About" webpage. Look at how they mix Luther and Calvin in their celebration and how they build off of their simplified ideas to construct guides for present-day living. It's all a mish-mash of theology and culture that would, I'd guess, have horrified Luther, Calvin, Zwingli, or even good ol' Pope Leo X. History indeed matters but not because we're still living in some mythologized 16th century. Context matters. It just does.
Posted by Matthew Gabriele at 10:24 AM

A teacher at Portland Christian said...

I find it fascinating that there are poeple from without concerned about what happens at PCS. I am so glad that the poster points out that context does matter...there is so much about what happened that day that you do not know. For instance, there is no way that you could no where the celebration came from, who introduced it to our school(who is not a Church of Christ member), and the fact the Mrs. Seay is not one of our teachers (she is in another role at PCS.) Also, the students interviewed by the paper were not students involved in the pre-reformation activities at the school, but were simply observers from another campus. All context, and all used to twist the truth of the event.

Thanks for the clarification, teacher.