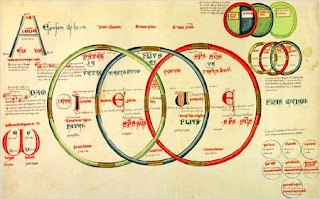 It's only fitting, I guess, that speaking of prophets makes you prophetic yourself. Way back in August 2008, I found a short Italian news article saying that Barack Obama was a reader of 12th-century mystic and theologian Joachim of Fiore, and that Obama had referenced Joachim no less than 3 times during Obama's presidential campaign. I did some digging and came up with nothing. I'm 99.999999999% certain that Obama did NOT reference Joachim and about 95% certain that Obama has not read Joachim's letters, his Book of Concordance, or his Book of Figures.

But what's evidence got to do with unsubstantiated claims? So, just last week the Vatican (meaning specifically Father Raniero Cantalamessa, preacher to the Pontifical Household) put out a statement condemning Joachim as a heretic and, at least implicitly, chastising President Obama for referencing Joachim positively from the stump. Articles here and here. Also, a bit more from Father Cantalamessa here.

But this may, in fact, be a teachable moment. How did Fathern Cantalamessa get his information? From the CNS Blog:

In an e-mail message this afternoon, Father Cantalamessa told me, “Typing ‘Obama Gioacchino da Fiore’ (the monk’s name in Italian) in Google, you will find all the news on which I based my remarks.”

This led Father Cantalamessa to go public with his condemnation of Joachim. Yet, it led the CNS blogger/ reporter (Ms. Cindy Wooden) to do this:

In an e-mail message this afternoon, Father Cantalamessa told me, “Typing ‘Obama Gioacchino da Fiore’ (the monk’s name in Italian) in Google, you will find all the news on which I based my remarks.”

Getting back to Obama and Joachim this morning, it appears most of the results that turn up in the Google search cite an Aug. 28 or 29 article in the Italian newspaper Corriere della Sera. But searching the newspaper’s Web site, no such article comes up.

The only thing I could think to do next was contact the most serious organization dedicated to studying and promoting the writings of Joachim, the International Center for Joachimist Studies. When I asked if they knew when Obama mentioned Joachim, a spokeswoman told me, “Everyone asks us, but we have no information and we don’t know how this got started. We don’t have on hand any information showing if or when he cited Joachim.”

Thank you, Ms. Wooden. Just thank you.
Posted by Matthew Gabriele at 12:12 PM

So we don't have a movement of angelic monks to look forward to? Good.