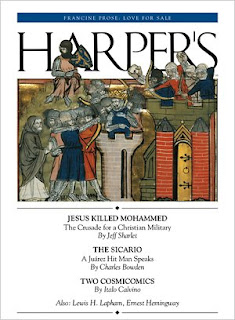 From the May 2009 Harper's magazine, Jeff Sharlet has an article about the "christianization" of the United States military (behind pay wall, unfortunately). On the right is the issue's cover, complete with 14th-century illustration of the taken of Jerusalem by the First Crusaders. I've talked a bit about this stuff elsewhere, but I thought I'd draw attention to Sharlet's article for a few reasons.

First of all, I don't like the chronological flattening that the cover suggests. Sure, it's a pretty picture. Sure, it's Christians vs. Muslims (and I'll talk a bit about that below). Sure, there are some interesting parallels with the Middle Ages. But what Sharlet's talking about sure ain't medieval. Context matters in all historical situations.

Sharlet is talking about a number of things here: the "invasion" of the military chaplaincy by fundamentalist evangelicals beginning in the 1980s, the political rise of many of these evangelicals to the highest ranks of the armed forces, and finally -- perhaps most importantly -- the implications that these developments have on how we, the United States, conduct ourselves in wartime (Sharlet's opening anecdote is excerpted here). And on this last point, allow me to point to some of his examples: the discrimination against non-evangelicals at the Air Force Academy, GIs desecrating mosques in Iraq with crosses, senior military leadership describing the war against Islam (yes, that's how they phrase it -- against the entire religion -- and they're not alone in thinking this way) as a battle between God (us) and Satan (them).

Ultimately, for it comes down to this. These evangelical strands in the modern US military are representative of pentecostal (he doesn't use that term but I would) evangelicals in the US more generally: Americans are the new chosen people because we fight for God/ Jesus. This is a discussion in an apocalyptic register, participation in a cosmic battle between good and evil, in which the means are necessarily excused for the accomplishment of the ends. Can you do wrong if God wants you to do something?

Maybe Harper's illustration wasn't so inappropriate after all -- not because what's going on is so medieval but because it's so eminently modern too.
Posted by Matthew Gabriele at 8:35 AM