For Jack Shafer of Slate.com: What Violent Rhetoric Does

This is an edit of a post from 3/25/10 (see original here).  It's inspired by a really ill thought-out article by Jack Shafer at Slate.com, called "In defense of inflamed rhetoric."  Well, Mr. Shafer, I'm no fan of "inflamed rhetoric" and here's why:
*****
(image: crusaders killing Jews, 13th c. MS) 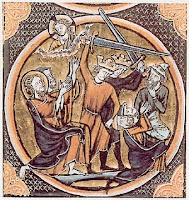 In May 1096, Christians attacked the Jews of Speyer.  The bishop of Speyer protected the Jews & arrested a couple of the perpetrators.  This ended the violence at Speyer.  The Christians, however, moved north, up the Rhine, to Worms and then to Mainz.  They massacred the Jewish communities they found in those cities, over the armed resistance of the archbishop of Mainz.  From Mainz, the Christians split up, with 1 segment moving down the Moselle river valley to Trier and Metz, killing a few and forcibly converting the rest of the Jews in those cities.  The other segment headed north from Mainz to Cologne, where they found that the bishop had moved the Jews out of Cologne & to a number of surrounding communities.  It didn't matter.  The Christians found them and massacred them all.


After Cologne  Metz, the Christians finally turned towards their ostensible goal -- Jerusalem -- meeting up and continuing eastwards, up the Danube and into Hungary.  That's because these Christians were crusaders.  The attacks upon the Jews of the Rhineland were the beginning of this army's participation in the First Crusade.

These armies of the Rhineland, the Christians who marched AWAY from Jerusalem in their quest to attack the Jews, were very much a part of the First Crusade, not some unfortunate byproduct.  They may not have heard Pope Urban II preach but few who went to the East actually did in 1095-96.  They almost certainly got the same general message, something we might be able to extract from Pope Urban II's surviving letters -- something about a spiritually-beneficial armed expedition, intended to liberate the Christians of the East from the non-Christians/ pagans.

One can argue that this message was simply “rhetoric,” that it was all language. But words have meaning.  Language, and the ideas it contains, influences actions. Put another way, words & ideas make people do things.  Words made the First Crusade.  Urban's preaching tour inspired men to leave home, walk 2,000+ miles to Jerusalem, and kill people they'd never met and hardly heard of before. Urban and the rest of his preachers may not have intended for the Jews of Worms, Mainz, and Cologne to be massacred.  But they were.  And they were because of the message that the crusade preachers preached and because of the field of actions that they're language opened for their listeners. The massacres of the Jews were caused by the same rhetoric that caused the massacre of the Muslims in Jerusalem in 1099, at the very end of the First Crusade.

In the wake of the vote in the House of Representatives passing health care reform in the US, at least 10 lawmakers who voted for the reform have received death threats.  Rep. Tom Perriello (D-VA), for example, has been threatened and the gas line to his brother's house was deliberately cut (possibly because the criminal thought it was Rep. Perriello's house).  Bart Stupak (D-MI) and James Clyburn (D-SC) were faxed images of nooses with threats attached.  Gabrielle Giffords (D-AZ) had her offices vandalized and a man with a handgun attended one of her townhalls. 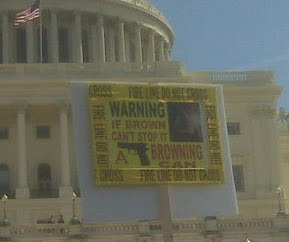 Why?  Why the "overheated language?" Where is it coming from?  From top and bottom.
It's coming from segments (NOT the entire) Tea Party movement that are fundamentally convinced that the actions of Obama and the Democrats are intended to strip away the people's rights, including (importantly, I think) their right to own firearms, and that a legitimate way to resist these government intrusions is with said firearms.  The Dept. of Homeland Security warned of these potential threats earlier.  The Southern Poverty Law Center has tracked a 54% rise in hate group growth since 2000.  These are, indeed, radical, fringe groups but ones that have now been co-opted for political expediency. The attack on Rep. Perriello, for example, was likely instigated by a militia leader who is part of his local Tea Party movement.
But it's coming from the top as well: from John Boehner, calling Rep. Steve Driehaus (D-OH) a "dead man" if he votes for health care reform, from Sarah Palin using gunsights to "target" vulnerable Democratic lawmakers, and from Rep. Steve King (R-IA), who stood out on the Capitol balcony to incite the Tea Party protesters during the health care debate by "slapping" a picture of Nancy Pelosi.

This is not the First Crusade.  But it is a language of violence too. Words have meaning and rhetoric/ language has consequences.  Politicians of all stripes should be wary of making a devil's bargain, using potentially violent fringe groups for political expediency.  These politicians should be aware that if they've stirred up the hornets and set them loose, they -- the politicians -- are ultimately responsible for any "unsavory" activities the hornets might get up to.
UPDATE,  3/26/10:  An incident in Nashville, where an SUV rammed a car with an Obama bumper sticker, even pushing the car into an intersection.

UPDATE #2, 3/26/10:  Adam Serwer at The American Prospect's (and Ta-Nehisi Coates') ideas on the entitlement in the Tea Party movement dovetails wells with what I'm saying above.

That's fine, as long as you do not imply, as you have by your links, that violent rhetoric only comes from one side of the political fence: see examples provided here which, frankly, are more vicious than any of the rhetoric above.

Lorenzo, thanks for stopping by again and not substantively engaging with my point. My post, if you read it, is about what happened during the health care debate. Then, indeed, the rhetoric was only coming from 1 side. For all her craziness, Jane Hamsher and Howard Dean didn't advocate stopping health care with a "Browning" (that's a gun), as the sign in the image above did.

And that link you gave gives no examples from the last year or so. If you want to keep going back in American politics and say that Bush hate on the Left (of which, of course, there was plenty) started all this, then I would point to Clinton's presidency and the right's vitriol against him. Then, of course, you could go back beyond that.

And at some point, someone has to take responsibility when someone kills 9 people while trying to assasinate a congresswoman, and not keep deflecting.

Where Galileo found a Epiphany in movement....

And the Rhine River Valley is looking pretty good for the wear.....

Most people just care if they can get a cheap hostel on Castle Road.....

For those who want to travel while they read history.....

Is that the castle you see in Montigney...

From the Mount blanc express terminal....