Something Pretty to Look at While I Stall for Time

Hello, all. I meant to write my first post quite some time ago, but life did that funny "life" thing it does and here we are. About a month ago I fell down the rabbit hole of a new research project on women in Norman Sicily. I spent about a month with Amatus of Montecassino's chronicle, doing the intellectual equivalent of hitting it with a hammer and scratching my head at it, hoping something would click for me. Last week it finally did. Unfortunately, it clicked just as I was signing the lease on a new apartment, and I've been struggling to balance advancing the idea with packing up things I forgot I owned years ago (three can openers? Really?). March has been a long, strange crazy trip, and April is shaping up to be just as fun.
I'm planning a post on my new research when things have solidified for me a bit more, but for now I beg your patience and forgiveness while I pick up my life and drop it approximately thirty miles west from where I currently sit. As a peace offering, perhaps you would like to take a look at this browser game I consulted for? Masters of Constantinople takes place in 1453; you are a young initiate in a secret society of scholars trying to save the city from the Ottoman siege. A dear friend of mine brought me onto the project last September and it was a blast to work on. You can see a trailer for the game here. 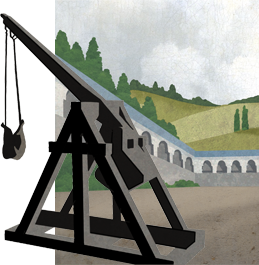 The game ties into a documentary series for Canadian History TV called Battle Castle. On the show's site you'll find another game I worked on, where you get to besiege fortifications instead of defending them. Good times.
Posted by Jennifer Lynn Jordan at 1:49 PM

Ooh, enjoy Norman Sicily. Loads of under-used material there and lots of work by Patricia Skinner to lead you to it. Also such a perfect place for tour--I mean research that I've often thought of trying to work up a comparative project involving it myself...

I just saw this comment now, JJ- thanks! I've loved Skinner's work and it was quite a relief to stumble onto some under-used material for once!