Letters to Past Selves

Yesterday, a former student of mine shared with me a short piece she wrote about her grandparents. Her grandfather has recently passed, and in the piece she reflects on loss and memory, all prompted by a photo. It got me thinking about how objects, physical and digital, hold memories. So, I wanted to share something I wrote about books and my grandfather.

I wrote this while a graduate student, and a few of the sentences and some of the academicese make me cringe, but I offer it below with minimal editing.

Letters to Past Selves

“the better part of our memories exists outside us”
–Marcel Proust, In Search of Lost Time
In my office, I am surrounded by books. Shelves and shelves of books. Each book sitting on my shelf carries the memory of former selves and of earlier times.  A set of books in my collection that is particularly loaded with memories for me includes those signed by another person, either the author or a previous owner.
The most recent book that has been signed is Snow by Orhan Pamuk.  I bought it right before departing on a cruise to the Caribbean with my wife’s family.  I must admit that my decision making process for selecting this did rest greatly on the juxtaposition of Pamuk’s snowy Kars with the sunny Caribbean.  And so now, whenever I consider this book, I experience a Wordsworth-like “spot of time”—a memory of long days unfolding upon the deck of a ship, in the open air, as I would occasionally glance away from my book to contemplate the blue-green clarity of the water.  But when this book found its way into the hands of its author, it gained a new temporality.  I had the great fortune of meeting Pamuk, and as one often does in such a situation, I asked him to sign his book.  Beneath his signature he placed the date, inscribing both himself and that moment upon my book.  His signature functions as a trace, and as such, gives voice to heterogeneous temporalities.  It is a mark of the past, recalling a particular moment in time.  And yet, it is present to me.  I can run my fingers over the ink.  Paul Ricoeur would call this the inscription of lived time upon calendar time.
The twin to this book is my signed copy of Salman Rushdie’s The Satanic Verses.  Both books are by international authors, and both writers are concerned with the meeting of East and West.  But an important difference between them is that Rushdie signed my copy of his book in my absence.  While I sat in Graham Chapel at Washington University, listening to Rushdie talk about his work and his life, my grandfather was in the hospital gravely ill.  The time of the intellectual, marked by books and lectures, was interrupted by the time of loss, and ultimately, of mourning.  When Rushdie was signing my book at the behest of a friend the next day, I was on the road, traveling home to attend the funeral of my grandfather.  Having recently read Jacques Derrida’s writings on the deaths of friends, collected in a volume called The Work of Mourning, I wish that I had made a copy of my eulogy rather than delivering it from memory.  I cannot now recall much about it.
The memory of my grandfather, linked forever with the signing of Rushdie’s book, leads me to make a connection between one signed book and another, between The Satanic Verses and a book that my grandfather owned.  On the fourth of July in 1997—it was the summer before my Junior year of college—my grandfather loaned me a book by John B. Noss titled Man’s Religions.  I can only dimly remember the conversation that led to his loaning me the book.  In a moment of humor appropriate to my grandfather, he signed his name, date, and address (apparently to remind me where he lived), along with a note that it was being lent to me, on the inside cover.  His inscription was a teasing reminder that I had occasionally “forgotten” to return books to him.  I never did return it to him, and now, I consider it part of my collection.  Although it is a good book on comparative religions, I keep it mostly for the inscription left by my grandfather.  But the book may conceal further temporalities and stories.  Why did my grandfather buy the book?  Originally published in 1949, this particular copy is the third edition of 1957, when he would have been in his late twenties.  Years later, in the 1980’s, he privately had his bar mitzvah, which he should have had decades before.  There is a story there that is not available to me, and perhaps this book plays a part, but I cannot ask him now. 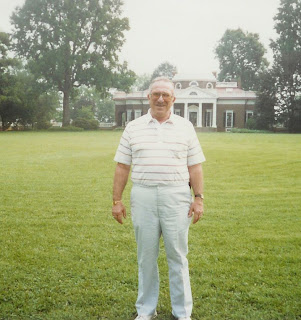 Memories of my grandfather conjure a third book, bringing me further back in time.  When I was very young, I went to visit him in the hospital—an option not open to me when he passed way.  He was recuperating from bypass surgery, and during that time my ever-garrulous grandfather had gotten to know a fellow patient.  As grandparents often do, he told her about me at great length.  And for some reason, she felt compelled to give me a gift during one of my visits, and this gift was the first novel that I remember owning.  It was The Hobbit by J.R.R. Tolkien.  Here I experience a double loss.  Not only is this book missing, but also my memory of receiving it lies at the vanishing point of recollection.  Only with great effort can I recall anything more than the fact that this event happened.  With some sadness, I do remember that I did not read The Hobbit until many years later.  At that time, I was not much of a reader.  My career as a reader did, however, begin with the genre which Tolkien inspired—fantasy.  And though I rarely read fantasy fiction now, the memory of this book still looms as a curious happenstance because I am currently training to be a medievalist, Tolkien’s own academic field.
My memories link back along the chain of the signature, and I think about another pair of signed books that I own, by two fantasy authors: Terry Brooks and Robert Jordan.  These books recall the larger series of books that the authors wrote many years ago.  Looking at them now, I am arrested by a certain set of memories. They are almost like Proust’s madeleine, overwhelming me with memories, sensations, smells.  They bring me to a period of my life when reading acted as a life preserver in the face of one of time’s truths: illness.  As an adolescent, I spent a significant amount of time in the hospital.  During my stays, I spent all of my free time reading, particularly the fantasy novels of Terry Brooks.  (I cannot think of one of his books now with out smelling the singular odor of the hospital—disinfectant.)  I am also reminded of Ricoeur’s reading of Virginia Woolf’s Mrs. Dalloway in volume 2 of Time and Narrative, where monumental time (manifested as official time, or clock time) intersected with the private times of the characters Clarissa and Septimus.  My stay in the hospital was marked by a similar dual apprehension of time.  Hospital time is regular, and largely impersonal.  Have your vitals checked at this time; receive your breathing treatment at this time; and take your medication at another.  The days would roll on, marked by the periodic and regular reminder of mortality and sickness.  The rest of the time, however, was one long unfolding of solitude.  During that private time, reading these fantasy books gave me a sense of “transport” in the way that Longinus defined it.  My love of books, which has ultimately led me to seek a doctorate, is anchored in that experience.
While these books harbor memories of many people and places, my collection also testifies to a Proustian succession of different selves.  The person that bought and experienced them is, to varying degrees, a stranger to me now.  And even though I have only recently developed a vocabulary for discussing time, all of those previous selves have always been keenly aware of both its passing and the problems created in its wake.  But in trying to apprehend my books under the aegis of time I must echo a sentiment of Walter Benjamin’s in “Unpacking My Library,” and acknowledge that “[t]his or any other procedure is merely a dam against the spring tide of memories which surges toward any collector as he contemplates his possessions.”
Posted by Rick Godden at 10:10 AM