Another win for open access to special collections holdings is making the news: the Wellcome Library has made over 100,000 high-resolution images of items in their collections available to the public, all under Creative Commons Attribution (CC-BY 2.0) licenses. For good reason, this news is getting due attention. What struck me was the number of medieval treasures now available--especially manuscript images.

In the cases of some of the Wellcome manuscripts, images provided are just the inside pages with modern descriptions (so hopefully more images from these items will appear in the future). In other cases, there are images of full pages. Many of these are fascinating witnesses to medieval scientific practices, such as an unidentified eleventh-century Anglo-Saxon manuscript with Old English medical recipes that Stewart J. Brookes discussed on the DigiPal blog.

I highlight a few others to give a sense of the Wellcome holdings.*

Some of the manuscripts contain astronomical lore, such as this Arabic Horoscope of the Mongol Prince Iskandar, grandson of Tamerlane, showing (according to the description) "the positions of the heavens at the moment of Iskandar's birth on 25th April 1384" (Or MS PER 474).

This horoscope, from The Book of the Birth of Iskandar, is a good witness to the holdings of Arabic items in the Wellcome collection. For example, searching for "Iskandar" with date range between 0 and 1500 calls up 392 results; searching for "Arabic" between the same date range calls up another 83 results.

A few particularly nice images, in fact, are from Arabic books (MS Arabic 421, 437, and 458), showing the bindings of different codices that are instructive for looking at the materiality of these objects: 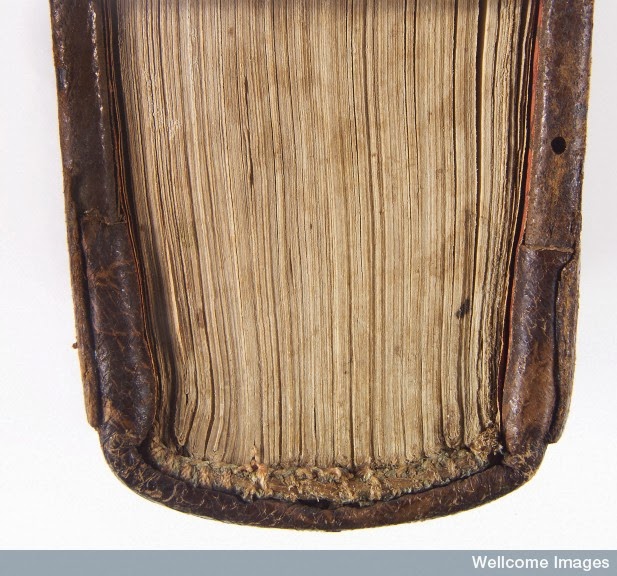 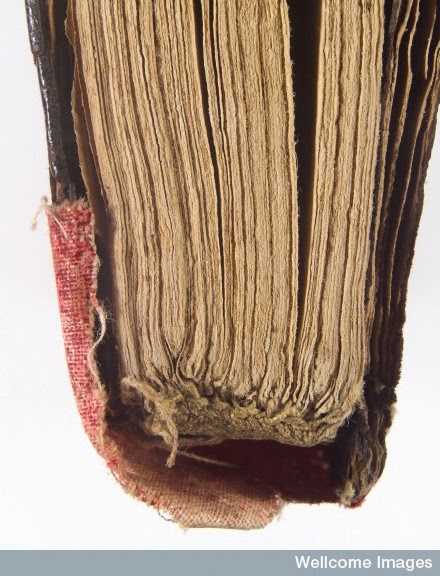 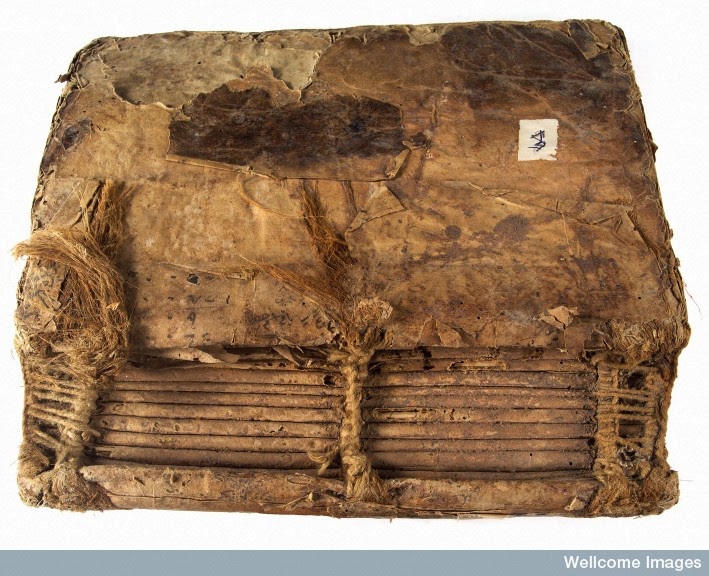 Other manuscripts contain medical knowledge mixed with other traditions, like the following three images, from a manuscript of the Apocalypse of John (MS 49, c.1420-30): the first, from the Apocalypse; the second, a diagram for urinomancy; the third, a diagram of bloodletting techniques within a zodiac. 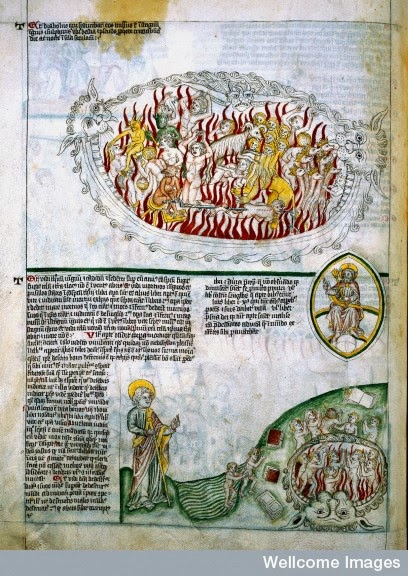 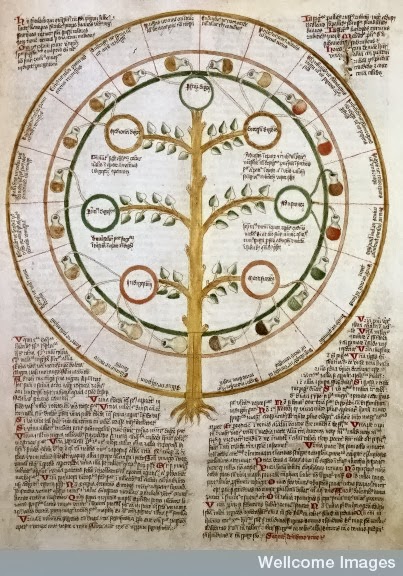 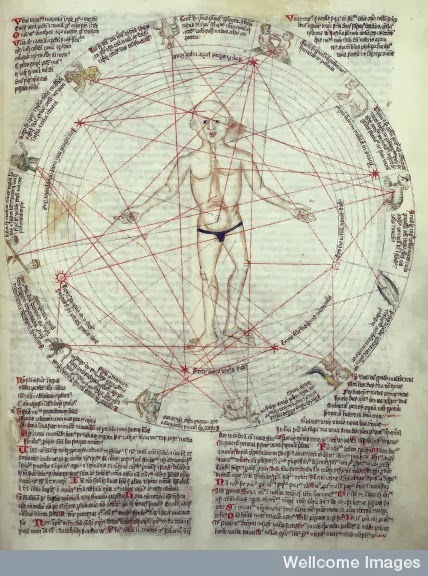 For those interested in 15th-century English texts, the Wellcome Images hold a selection of scientific writings from the period. A few good examples: first, a collection of English and Latin scientific tracts (MS 411/3), with the image here from a text "On Unlucky Days"--a particularly fascinating genre of astronomical lore; and, second, a manuscript of the Pseudo-Galen Anathomia in English (MS 290). 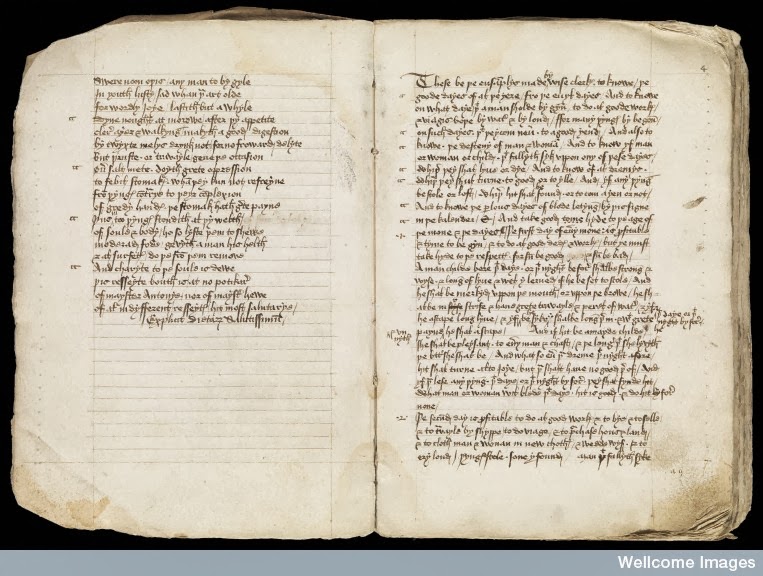 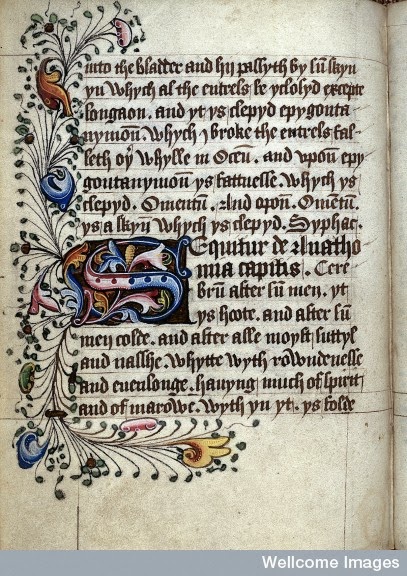 This is just a small selection of some of the images that jumped out at me. Certainly the collection is worth much more extensive exploration, and can lend much to bringing medieval artifacts into the classroom.

* On a side note, a few frustrating issues make navigating the site difficult. One is a lack of clear browsing abilities--for example, to browse just manuscripts, or to limit by time or geography. Another is the lack of permalinks for items, making it difficult to cite individual images or item entries in the collection. For this reason, I've provided the low-resolution images here, though high-resolution images are available to download from the Wellcome site.
Posted by bwhawk at 9:59 AM