South Carolina as the New Byzantium 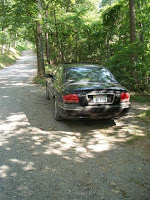 This past Summer, the me and the family took a little beach vacation to Hilton Head, SC. Beautiful beaches, upscale community, nice time had by all.

Getting there from I-95, you have to take some relatively small roads. Indeed, getting from Hilton Head to anywhere else requires a number of small-ish roads. On those parts of the drive I was struck by the stunning number of abandoned cars we saw on the side of the road. None, however, were burnt out or were missing tires. All were in pretty good condition, almost like the rapture had finally come. I was utterly confused by what I saw until I remembered this:
I was in Le pelerinage de Charlemagne and South Carolina is the new Byzantium! Those cars weren't abandoned but were simply left there to be reclaimed later by their rightful owners, who would have no reason to fear that anything would happen to their cars. A resurrected, imaginary paradise...

UPDATE: and now, which character's Cong. Joe Wilson (R-SC)?
Posted by Matthew Gabriele at 9:00 AM

South Carolina ain't Byzantium (trust me, I live here, although I'm not from here). And Hilton Head is not only not South Carolina, it's not even in the South! Look around. Everyone is from New Jersey or Ohio.