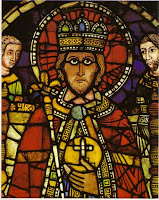 I have just now been informed (by Jeff Sypeck) that Charlemagne may be coming back. Like, soon. This is a subject of which I'm somewhat familiar, having written a blog post on this subject comparing Charles & Tony Soprano, edited a book about the legend of Charlemagne, and now completing a different book on said subject. So, I feel compelled to comment...

First of all, I do not encourage regular reading of The Philadelphia Trumpet or, at least, I don't suggest getting your history from it.

Right. So, the article in question leaps -- and I mean leaps -- from a comment made by Bernard Connolly that the Euro struggles between German and French bureaucrats, each working "under the banner of Charlemagne." From there, well, I don't really follow it honestly. Something about the money being controlled by Germany and then them taking over the EU and reducing the number of countries involved to 10. I don't know how this will happen. The author doesn't say, but he does use another quotation that has the word "Charlemagne" in it.

Now, the history lesson begins, taking us down to today:
QED. Take that, logic!
Posted by Matthew Gabriele at 11:16 AM

Logic, shmogic! I love that Charlemagne can be all things to all people. I'm confused about Charlemagne being called the second ruler of the Holy Roman Empire. Are they suggesting Pippin? Or Constantine, as you say? If so, what about all those many intervening reich-masters? And how Reich-ish was Pippin's rule, anyway?

"Germany is about to start World War iii — according to your Bible."

No, Gerald, not according to mine.

Your bullet points are scary enough in regard to the author's barest acquaintance with history and logic. I don't think I have the stamina right now to read the original source material. The cover was amusing though.

Thanks for the summation.